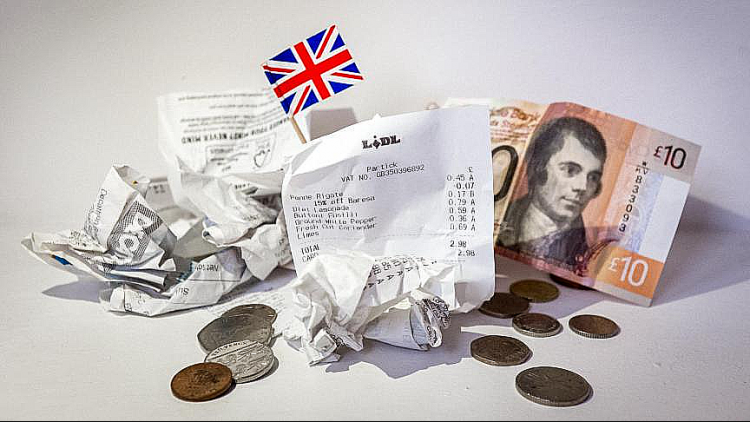 As back-to-school approaches, British citizens seek ways to reduce spending in response to unbridled inflation. This new school year is overshadowed by rising costs, a clear economic repercussion of the raging hostilities in Ukraine. [i]
The 11.6% increase in food costs over the past four weeks is attributed to the decline in the pound’s value, supply chain disruptions, and fuel shortages. The surge in inflation during the past month severely impacted consumers, leaving the citizens at a crossroads between purchasing food and heating their homes as winter looms closer. [ii]
Currently, inflation in the United Kingdom is getting dangerously close to 10%, which would be an all-time high for the last four decades. The British GDP declined by 0.1% in the second quarter, and the country is likely heading into a dark recession by the end of the year.
It is projected that inflation will climb further in the following months, up to 13%, triggering a socioeconomic crisis in purchasing power that threatens to drive many families into abject poverty and starvation, as price rises have been pervasive during the previous month. “Foodstuffs have significantly grown, in particular, bread, dairy products, meat, and vegetables,” declared the head of the British Office for National Statistics (ONS). In mid-August, the UK energy sector urged the government to “rapidly” increase consumer support in response to rising energy costs. However, outgoing Prime Minister Boris Johnson has contemptuously relegated this issue to his successor.
Truss, who seems set to win the election, has promised tax cuts that she estimates would cost £38 billion per year but which economists believe might cost more than £50 billion per year. Yet, she asserts that this would stimulate the economy. However, tax cuts of this kind will do little to address the underlying causes of Britain’s financial imbroglio. [iv] According to Samuel Tombs, an economist at Pantheon Macroeconomics, “The high rate of inflation in the United Kingdom is the outcome of wrong fiscal policy and Brexit, and by startling British families with a sudden spike in energy costs or tax cuts, it is impossible to curb inflation.”[v]
While the UK is plunged into nationwide strikes over skyrocketing inflation, Liz Truss, the poll frontrunner to replace Johnson in 10 Downing St, has been urged by advisers to reconsider the BoE’s independence immediately.
Today, the Bank of England (BoE) is under a barrage of criticism from economists, who accuse it of falling asleep behind the wheel and exposing the United Kingdom to the highest inflation rate among the Group of Seven (G7).
Other analysts suggest that the BoE must raise its interest rates to restrict borrowing and avoid inflation, driven by the rise in energy prices, thereby preventing a cycle of growing wage demands and price levels that would result in spiraling inflation.
Meanwhile, workers at the key port of Felixstowe started an eight-day strike on Sunday, August 21, 2022. They demand wage increases in the face of inflation. This walkout could prove problematic for the country’s supply chains in addition to being a potent symbol: a once-thriving port that had not seen a strike in over three decades is today immersed in a severe crisis. [vi]
Last Friday, London’s subway was almost paralysed, and the rest of the public transportation network was severely disrupted, as was the case of bus services in west and south-west London due to strikes over pay in response to galloping inflation in the UK.[vii]
Even though Economy Minister Nadhim Zahawi has ostensibly ruled out the possibility of electricity disruptions this winter, ominous signs are growing about the United Kingdom’s energy predicament.
In the wake of the energy crisis, it is estimated that the cost of electricity per person will increase by more than threefold beginning next January.
Matthew Taylor, head of the National Health Service (NHS) Confederation, said that “the UK is facing a humanitarian catastrophe” and that the scenario “may unleash waves of disease throughout the country,” with implications for infant mortality in particular. He emphasised that unless the government takes immediate action, this condition will result in a public health disaster. [viii]
On the other hand, in a desperate attempt to alleviate the energy crisis, the British government may provide up to £6 per kilowatt-hour of off-peak power consumption to reduce the possibility of blackouts. [ix]
In a quasi-revolutionary initiative, Nicola Sturgeon, First Minister of Scotland and Leader of the Scottish National Party, stressed that the option of nationalising energy firms to reduce prices amid the cost of living crisis should not be ruled out. The local government in Scotland estimated that 36% of families are in fuel poverty, indicating that they spend 10% of their income on energy. [x]