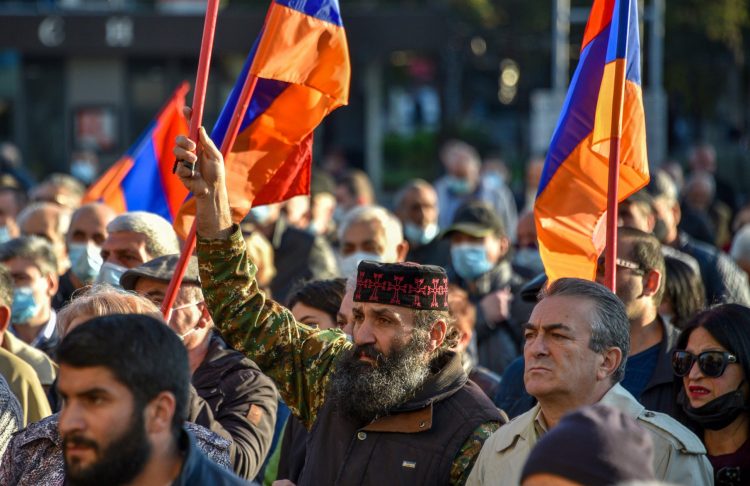 On November 9, 2020, the second Nagorno-Karabakh conflict finally ended when Nikol Pashinyan, Armenia’s beleaguered Prime Minister, signed a trilateral ceasefire deal with President Ilham Aliyev of Azerbaijan and Russian strongman Vladimir Putin, bringing a temporary stop to the disastrous war, which has been raging on since May 1994.However, Mr Pashinyan’s recent controversial statements have sparked considerable outrage in Armenian society, with many interpreting them as a blatant betrayal of Armenia’s national interests, as massive rallies against Pashinyan and his pro-US administration have been escalating across the country.“The international community wants Yerevan to lower its expectations regarding the Nagorno-Karabakh crisis,” Pashinyan told the Armenian parliament on April 13, adding that “if Armenia does not recognise the Republic of Azerbaijan’s territorial integrity and its sovereignty over Nagorno-Karabakh, it will create a dangerous situation for us, as Yerevan would have no foreign support in any future conflict with Baku.”Pashinyan’s pusillanimous remarks have sparked wild speculation on the part of Armenia’s enraged opposition parties that Yerevan will ultimately capitulate to Baku’s terms, further endangering the Armenian communities still living in disputed Nagorno-Karabakh and the future of the war-ravaged region.Meanwhile, Ishkhan Saghatelyan, the Armenian Parliament’s deputy speaker and one of Pashiniyan’s most ardent opponents, stated: “Our people reject the imposed political situation in Nagorno-Karabakh by Baku. Pashinyan has abused the people’s trust and must step down.”“We must pour into the streets,” Mr Saghatelyan said during a massive protest in Yerevan, where the entire city was wrapped in the tricolour flags of the Republic of Artsakh, a de facto independent state in Nagorno-Karabakh with an ethnic Armenian majority. However, it is recognised internationally as part of Azerbaijan.Demonstrations against the Prime Minister have increased dramatically, with daily protests and marches taking place in Yerevan, particularly in the main square and in front of the Presidential Palace.Anti-Pashinyan activists reportedly blocked the gates to the President’s mansion on Wednesday, May 25th, according to local news sites such as the ARMENPRESS.Mamijanyan Hayk, a senior MP in the Arminian national assembly and a member of the “I Have Honor” alliance, also told reporters in Yerevan that anti-Pashinyan protesters were waging a “peaceful disobedience campaign,” adding that: “I told the police that even if the doors of the President’s mansion were open, we would not enter.”Opposition groups chanted “Shame on Pashinyan” and “Nicole is a traitor” and urged his immediate resignation.Dozens of people are said to have been arrested during the protests in Armenia, including Levon Kocharyan, the son of former Armenian President Robert Kocharyan, who was assaulted when police intervened to detain the opposition activists.

Article
Armenia
There are no comments for this article