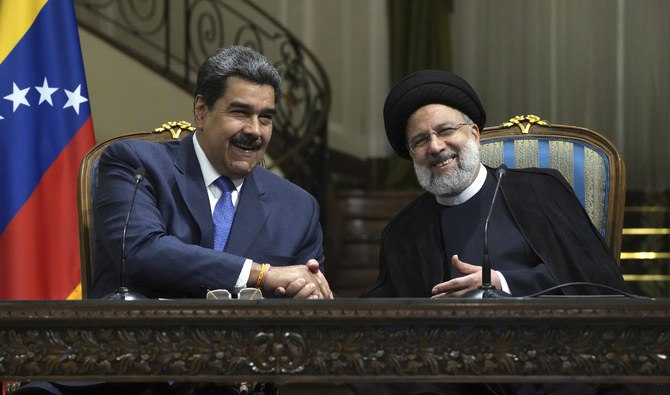 The Venezuelans have confronted valiantly the American “economic terrorism” since the term of the late Hugo Chávez, who raised the banner of countering US imperialism and resisted the US-orchestrated coup d’état and Washington’s malign intervention in Venezuela, which aimed to sow insecurity and unrest in the Caribbean nation.

Today, Venezuela has precarious financial circumstances due to sanctions imposed by the United States and has therefore experienced unprecedented hyperinflation. Yet, the Venezuelan nation and its politicians insisted on their freedom and tenaciously defended their country’s independence. So, Venezuelans and their leaders have a sincere hope to cooperate economically and politically with Iran, as they ardently conveyed this desire during Maduro’s trip to Tehran.

Officials in Caracas believe that by cooperating with Tehran, as two independent nations facing US sanctions, Venezuela and Iran may circumvent Washington’s unilateral sanctions through reciprocal cooperation.

Most Venezuelan experts hope Maduro’s visit to Tehran will harbinger a dramatic economic expansion between Tehran and Caracas and form a strategic alliance.

Prior to his landmark two-day visit to Tehran, the Venezuelan president, Nicolás Maduro, told HispanTV, an Iranian news network broadcasting in Spanish, that Venezuela and Iran are at the vanguard of a historical transition, the birth of a new world, free of US imperialism and dominance.

“Despite their geographical distance, Iran and Venezuela share identical objectives, such as establishing an egalitarian, multipolar world free of US hegemony,” said Mr Maduro.

He emphasised that Iranian and Venezuelan revolutionaries should be cognizant of the ongoing geopolitical shifts that are taking place on the international stage, adding that the current conditions clearly reflect the downfall of US hegemony.

Expressing the significance of his visit to Iran, Maduro highlighted the expansion of cooperation between the two nations, which has considerably extended over the course of the past two decades and has witnessed the advent of a fraternal bond, partnership, and shared interests.

He lauded Iran’s deployment of several petrochemical tankers in mid-2020 to Venezuela as an example of unequivocal Iranian support for his nation during the height of the COVID-19 pandemic and catastrophic financial circumstances imposed by US sanctions.

Maduro pointed out that the crews of the Iranian oil tankers were faced with threats by the US navy on the high seas, stressing that the Iranian generous help boosted Venezuela and enabled it to begin the resuscitation of the oil industry and national sanction-hit economy.

The Venezuelan president also reiterated Caracas’ solidarity with the Palestinian cause and underlined that the Zionist regime is responsible for the daily slaughter of Palestinian women, children, and young people.  While several Arab governments are vying to establish diplomatic ties with Tel Aviv, Maduro continued, Tehran and Caracas share a commitment to supporting the Palestinian people in their quest for self-determination and the establishment of their own independent state.

The 20-year deal between Venezuela and Iran

The left-wing president of Venezuela declared that during his meeting with the Iranian president, Ebrahim Raisi, the two sides discussed a 20-year cooperation roadmap to enhance cooperation between the two countries in the long run.

The signing of a 20-year agreement between Iran and Venezuela at the conclusion of the visit may prove to be a watershed event for relations between the two countries. Cooperation in the fields of energy, petrochemicals, economics, tourism, culture, and diplomacy was included in the agreement. In this context, Iran’s and Venezuela’s economic activists in the state and private sectors would adopt more vital measures to expand financial and cultural links.

The Iranian private sector is currently making strenuous efforts in this direction, including the restoration of direct flights between Tehran and Caracas, which are scheduled to become operational by the end of June. This crucial move has the potential to promote tourism between the two nations.

On the other hand, exploration of Venezuela’s oil reserves is highly dependent on the operations of international corporations. In this regard, Iran has supplied Venezuelan refineries with petrochemicals and provided unwavering support to the Caribbean nation’s oil exploration and petrochemical industries. Moreover, Iran’s private sectors have been involved in the export of a variety of commodities to Venezuela. Furthermore, it has been demonstrated that Iranian housing construction plans in Venezuela have had positive outcomes.

Besides, an Iranian tractor factory has been constructed in Venezuela for many years, but its production has obviously diminished. Therefore, it is imperative to revive the factory, which could definitely be in the interests of both countries.

According to the 20-year pact, Iranian and Venezuelan economic activists in the state and private sectors must develop more comprehensive strategies to augment the Tehran-Caracas partnership. These initiatives have also the potential to enormously improve the tourism industry between the two countries.

Furthermore, shipping lines should be more active in transporting commodities between the two countries. Therefore, the Iranian private sector shipping companies’ resources must be actively employed, as Iran’s traditional rivals, such as Turkey and India, are now taking massive measures to deepen their economic ties with Venezuela.

Hence, Tehran must not overlook the reality that it has formidable competitors who are striving hard to take over Venezuelan markets.

In conclusion, it was made abundantly clear by Nicolás Maduro’s trip to Tehran that the US-Israeli plot to isolate Iran has been an utter failure, as have been prior desperate attempts to erase the Palestinian cause in the eyes of the international community.