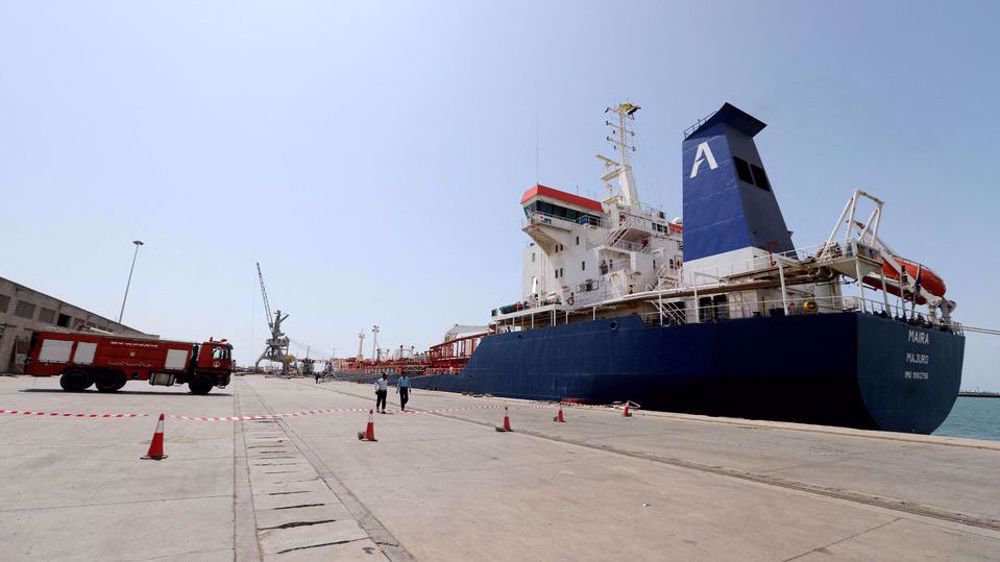 In this file picture, an oil tanker docks at the port of Hudaydah, Yemen. (Photo by Reuters)

In a fresh act of piracy against the besieged Yemeni nation, the Saudi-led coalition has seized yet another Yemen-bound fuel tanker and did not allow it to dock at the western Hudaydah port and offload its crucially needed cargo.

Essam al-Mutawakel, a spokesman for the Yemen Petroleum Company (YPC), announced in a post published on his Twitter page on Thursday that the Saudi-led alliance seized the ship named Primorye, which was carrying thousands of tons of mazut.

The senior Yemeni energy official noted that the ship was seized and prevented from reaching the port of Hudaydah despite having undergone inspection in Djibouti and obtaining necessary permits from the United Nations Verification and Inspection Mechanism (UNIVM).

The development comes more than a week after the Riyadh-led coalition, which has been waging a devastating military campaign against Yemen since 2015, seized a vessel named Red Ruby, which was carrying thousands of tons of petrol, and banned it from anchoring at Hudaydah port despite securing UN clearance in Djibouti.

The prime minister of Yemen's National Salvation Government warned that foreign companies will have to endure a military response if they ignore warnings and insist on approaching Yemeni coasts to extract crude oil.

Abdulaziz bin Habtoor said on Thursday that Yemeni crude oil and natural gas resources have been plundered by the Saudi-led coalition and the Saudi mercenaries for the past seven years, and they pocketed the profits which are expected to stand at hundreds of millions of dollars.

“We would initially send out a security warning. We would take a firm military action in case they do not take heed of our cautions and sail towards Yemeni ports, either Aden, Hudaydah, al-Dhaba or al-Nashima.

“We have repeatedly expressed our desire to extend the truce agreement on the provision that the rights of civil servants and members of military and security forces are restored. We have clearly stated that we will not allow any party to take away Yemen's oil and gas without reaching an understanding with Sana'a,” Habtoor highlighted.

He emphasized that the Sana'a-based government exercises sovereignty over all Yemeni ports, and that Yemeni forces are closely monitoring them.

“Any company that tends to cross the red lines and illegally loads and transfers Yemeni oil and gas will be punished by Yemeni Armed Forces,” Habtoor pointed out.﻿﻿
﻿﻿Saudi Arabia launched the devastating war on Yemen in March 2015 in collaboration with its Arab allies and with arms and logistics support from the US and other Western states.

The objective was to reinstall the Riyadh-friendly regime of Abd Rabbuh Mansour Hadi and crush the Ansarullah resistance movement, which has been running state affairs in the absence of a functional government in Yemen.

While the Saudi-led coalition has failed to meet any of its objectives, the war has killed hundreds of thousands of Yemenis and spawned the world’s worst humanitarian crisis.

Saudi Arabia
Yemen
There are no comments for this article