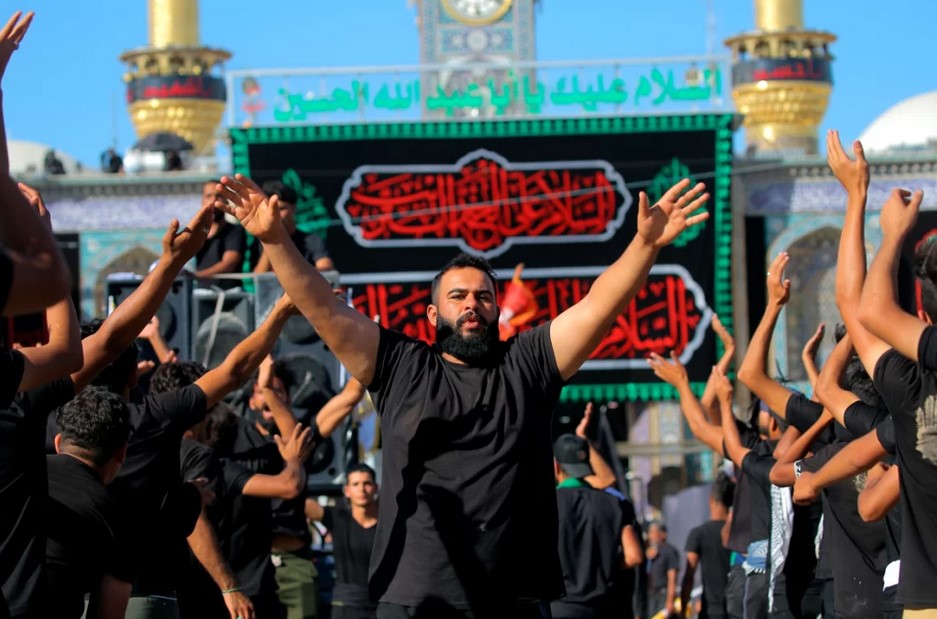 What is the day of Arba’een?
The Arabic word ‘Arbaeen’ (pronounced Arr-ba-een) translates to forty (ie fortieth day). The traditional period of mourning in Islamic culture is forty days. As such,  millions of people around the world mark the Day of Arbaeen by remembering the story of Hussain, his family and his companions. Hussain ibn Ali was a 7th-century revolutionary leader who made the ultimate stand for social justice against the ruler Yazid. Yazid was a corrupt ruler who was violating the basic rights and dignity of the people. Yazid wanted Hussain to acknowledge his rule and give credibility to his corrupt leadership. However, Hussain refused to do so, based on his moral values and principles and was killed along with his companions holding onto their honour and dignity. After the Battle of Karbala, Yazid men took the women and children of Hussain’s family as prisoners. They were degraded as they were forced to walk in chains through many towns and cities including Damascus and Kufa – where they were abused by crowds until they were eventually presented to Yazid and placed in prison. Hussain may have died, but his movement lived on. His sister Zainab and son Ali ibn Hussain both gave powerful speeches against Yazid in front of his ministers, calling him out for his corrupt regime and unnerving Yazid’s ministers.  Yazid eventually realised that if he left his family Hussain at his palace they would humiliate him in front of his ministers even further and was forced to free them. The family of Hussain would spend their lives after the Battle of Karbala teaching people about Hussain’s message and his stand against corruption.
It is said that the Day of Arbaeen is the day on which Hussain’s family returned to the land of Karbala, to properly bid farewell to the fallen heroes and finally grieve for their loved ones. Today, almost 1400 years later, the Day of Arbaeen is remembered by millions of people around the world. It is marked as a day to pay tribute to the sacrifice of Hussain for social justice. Typically, on this day people organise large marches in cities across the world to symbolise the eternal nature of Hussain’s revolution and to show they stand for social justice, compassion and dignity. In recent years a tradition of walking 80km from Najaf (the resting place of Ali the father of Hussain) to Karbala has been reignited. Every year since the number has been rising steadily from 17 million pilgrims to at least 25 million. People from all walks of life and all corners of the globe make the journey, despite the imminent threat of terrorists who have vowed to attack the pilgrims. Along the 80km stretch from Najaf to Karbala, volunteers distribute free food and drinks to those undertaking the pilgrimage, as well as offer places to relax, wash and sleep. Arbaeen Day is now the largest annual peaceful gathering in the world, with numbers set to increase significantly every year.

Arba’een unites humanity not only the Muslims.
Reporting on Arbaeen in the news channels of the Islamic ummah far and wide focuses on the central elements of the pilgrimage: the hospitality of the Iraqi people, which has won UNESCO world heritage status; the gathering of many different nations and religions; the recognition of Hussain, the grandson of Prophet Muhammad, as the saviour of Islam in the face of a tyrant. Pilgrimage groups from all over the world are organised and invited to attend Arbaeen; Shia Muslims and Sunni Muslims take part, also non-Muslims are invited, for example, Christians and Zoroastrians and even non-religious people flock there. In the light of fearmongering and warmongering to which parts of the Western world have succumbed, Arbaeen is akin to a harbinger of hope for our malaised societies. The kindness, selflessness and generosity particularly of the impoverished sections of Iraqi society, who nonetheless do all they can to cater for the pilgrims, reminds us of a hadith by Imam Baqir (as): in it, he describes the time when (Imam) Mahdi (aj) comes, that sincere and strong brotherhood will also arrive, and that a brother who needs money will put his hand into the pocket of his brother and his brother will not stop him. (Bihar ul-Anwar, vol. 52, p. 372).
Arbaeen shows us in the here and now the kind of society we can create: one in which we walk in friendship, love and brotherhood and sisterhood alongside each other, irrespective of our nationality, financial status and ethnic or religious background. At Arbaeen the physically able assist those who are weak, at times even physically carrying them to the destination. People welcome strangers into their houses and give them shelter and food. Despite the threat of terrorist attacks by Daesh cells, the pilgrim feels immense peace, trust and safety. We should view Arbaeen as a model for our societies; the historical events of the battle of Karbala and the fortieth-day visit to Imam Hussain needs to have a bearld not be viewed as an event in the distant past. The kindness, mercy and fearlessness in the face of oppressors, qualities that pour from the heart of Islam, are practices that can be implemented in our modern lives, as witnessed in Arbaeen.

Blessings of visiting Imam Hussain (peace be upon him.
There are many blessings and rewards associated with doing the ziyarah of Imam Hussain (p) in Karbala, especially on Arbaeen. Imam Jafar al-Sadiq (p) is reported to have said, “Do not abandon visiting him [Imam Hussain (p)] for [unjustifiable] fear of anything. Verily, whoever shuns visiting Imam al-Hussain’s (p) tomb for [unjustified] fear of anything shall feel extreme regret that they shall wish if they were to stay there until they would be buried next to that tomb.” Prophet Muhammad (PBUH) is reported to have said, “Man is not considered a believer until I am dearer to him than his self, my household is dearer to him than his Household, and my family is dearer to him than his own family”
Developing a connection with the Ahl al-Bayt (pbut), specifically Imam al-Hussain (p) for Arbaeen, is an important starting point. Throughout the months of mourning, our parents ask us to go to the mosque more and participate in gatherings of sorrow (majalis) there and at people’s homes. We see their genuine pain and tears when they hear of the martyrdom of Imam Hussain (p), his family, his loyal companions, and those who were taken as captives. Without having a connection to the Ahl al-Bayt (pbut) there are no tears or true remembrances of Imam Hussain (p). Sometimes, when our parents want us to do things, we often want to do the opposite. But, next time you feel this way, think about what you have to gain or lose. Developing a relationship with Imam Hussain (p) has no downside. On the contrary, it will only benefit you.  All it takes is some effort on your part. Open a book about Imam Hussain (p). When you are on your phone or laptop, read about Karbala, or watch YouTube videos about the life of the Imam (p). Developing that connection with Imam Hussain (p) will change how you commemorate the event of Arbaeen. You will then understand why millions leave their homes and families behind to travel to Iraq, walk almost 50 miles from Najaf to Karbala, and flock to visit Imam Hussain’s (p) tomb.

Conclusion.
One of the main goals of public diplomacy is to bring people together to increase the intercultural dialogue. If we accept this, then practitioners should follow one of the largest public diplomacy gatherings of today’s world: the Arbaeen ceremony in Iraq. According to various estimates, each year, close to 20 million Muslim nationals from almost all walks of life set upon a pilgrimage to Iraq’s holy city of Karbala. In Arbaeen, nationals from Iraq, Iran, Lebanon, Bahrain, Afghanistan and many other countries start a walking tour inside Iraq toward Karbala to commemorate the 40th day of Shia Imam Hossein’s Martyrdom. Imam Hossein is the grandson of Prophet Muhammad who, according to the Shia, was killed by Yazid in a brutal battle imposed upon him and his family almost 1,400 years ago. Since then, the Shia commemorate his demise each day during Ashura and also 40 days later on Arbaeen. The general philosophy is very similar to the Christian recognition of the crucifixion of Jesus in that he died to save human beings from their sins.