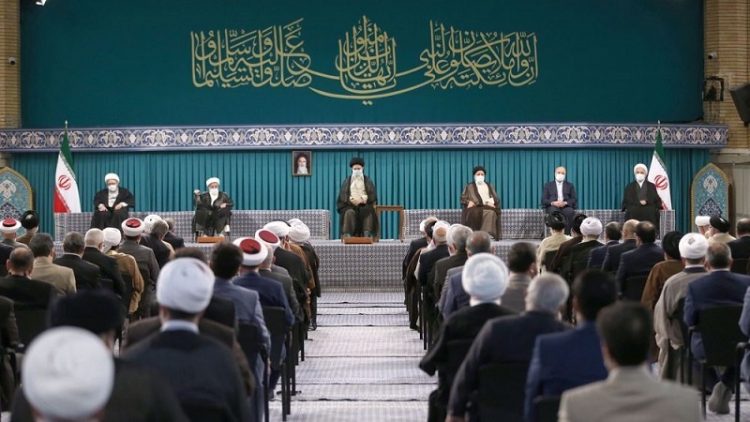 Ayatollah Seyyed Ali Khamenei is holding a meeting with Iranian officials and guests of the 35th International Islamic Unity Conference.

The meeting is taking place in Tehran on Sunday, on the occasion of the birth anniversary of Prophet Mohammad (Blessings of God upon him and his progeny) and the sixth Shias’ Imam, Imam Ja’afar Sadiq (PBUH).

Ayatollah Seyed Ali Khamenei granted the pardon at the request of the country’s Judiciary Chief Hojat-ol-Islam Mohseni Ejei on the occasion of the birth anniversaries of Prophet Muhammad (PBUH) and Imam Jafar Sadiq (AS), the sixth Shia Imam.

Hojat-ol-Islam Mohseni Ejei had proposed the amnesty for 3,458 prisoners.

The Prophet of Islam was born on the 17th day of the lunar calendar month of Rabi al-Awwal in 570 CE. The date also marks the birth anniversary of Imam Sadiq (AS).

According to the Sunni narrative, the birth date of the Prophet (PBUH) falls on the 12th day of Rabi al-Awwal.

Article 110 of the Constitution grants the Leader the right to pardon or reduce the sentences of convicts upon a recommendation from the head of the Judiciary.

The clemency, however, does not apply to certain types of convicts, including those who have been sentenced for their role in the armed struggle against the country, armed or organized drug trafficking, armed robbery, arms smuggling, abduction, bribery, and embezzlement.