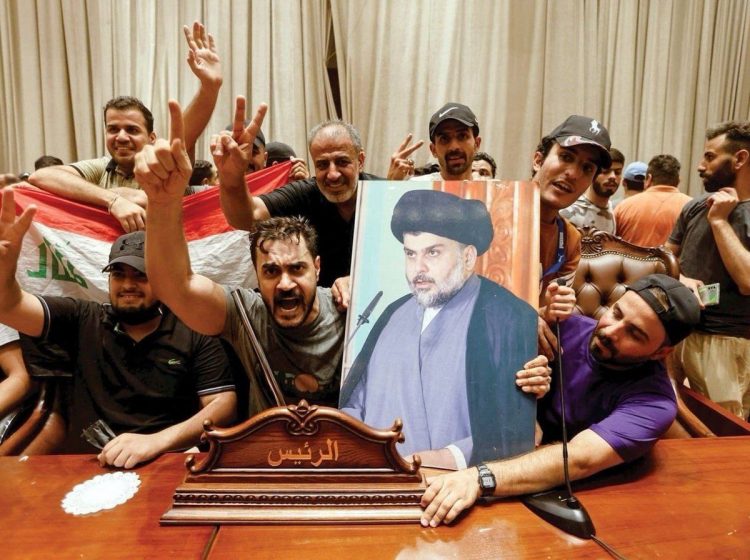 After “the Shiite Coordination Framework (SCF),” an umbrella of staunch political adversaries to Muqtada al-Sadr, a populist and fanatic cleric, designated Mohammed al-Sudani as a candidate for the post of Prime Minister to succeed Mustafa Al-Kadhimi, Iraq became amid severe political turmoil during tough economic times.
The formation of ephemeral political coalitions and counter-coalitions has rendered the creation of a viable administration into an insurmountable political impasse, particularly after Sadrist MPs tendered their resignations collectively, which has presented the Iraqis with a political conundrum from which it may be challenging to emerge unscathed.
Sadrist MPs resigned from Parliament as they initially believed this political maneuver shall give them more freedom of action to oppose SCF through street demonstrations and mass rioting to thwart the formation of a cabinet by their opponents.
Instead, Sadrists formed a cross-sectarian, tri-partite alliance called al-Saeroun [which translates to “Marching for Reform” in Arabic] with the Masoud Barzani-led Kurdistan Democratic Party (KDP) and the Sunni al-Siyadah faction under the leadership of the Speaker of Parliament, Muhammad al-Halbousi.
According to political commentators, Muqtada al-Sadr formed the al-Saeroun alliance in a bid to establish an allegedly national government that would function outside the influence of military affiliations such as the Popular Mobilisation Forces (PMF).
On the other hand, with the withdrawal of the Sadr movement from Parliament, the vacant seats were inevitably filled by Shiite lawmakers loyal to the SCF, especially by the members of the “State of Law Coalition,” which is led by the Islamic Dawa Party’s former Prime Minister Nouri al-Maliki.
This dramatic development further deepened the schism between the Sadrist bloc and the Iran-backed SCF.

Who is Mohammed al-Sudani?
Iraqi political analysts claim that Nouri al-Maliki could not run for the Prime Minister as the path was filled with many political impediments. However, his protégé and close ally, al-Sudani, will likely adopt and continue al-Maliki’s political and security agendas, of course, behind the scenes.

Saddam’s Ba’athist regime executed his father and several family members, and he too participated in the 1991 Iraqi uprisings [known as the Shabaniyah Intifada].With the collapse of the Baathist regime in 2003, al-Sudani was appointed as the governor of southeastern Maysan province during al-Maliki’s tenure and is generally regarded as an ardent supporter of the Popular Mobilisation Forces (PMF).

Many deem al-Sudani a determined and disciplined technocrat politician seeking to implement radical and profound transformations in economic and administrative sectors. He also holds a master’s degree in project management.

Furthermore, al-Sudani will endeavour to make drastic shifts in the military and security apparatus under Mustafa Al-Kadhimi, as some officers secretly affiliated with the former Ba’athist regime were allowed to infiltrate and rise to prominence.
For instance, Khalid, the son of Sultan Hashim Ahmad al-Tai, who served as the last Minister of Defense under Saddam Hussein’s regime, entered the Parliament from the mainly Sunni-populated Nineveh district.
There is no doubt that a large number of military commanders would be replaced if al-Sudani was successful in consolidating his position. For example, Colonel General Abdul-Wahab al-Saadi, the current head of the Iraqi Counter-Terrorism Service, would be forced to retire, and other military supporters of al-Sadr would not be able to act as freely as they had in the past.
In addition, Baghdad will move closer to Iran and China if al-Sudani is picked as Iraq’s PM, which would be devastating news for both Israel and the United States.
To the detriment of the Sadrists, in the case of al-Sudani’s appointment, PMF will almost certainly gain more paramount military clout, and the calls for withdrawing American and Turkish forces from Iraqi territories will grow even more intense.

Muqtada reacts
In a violent rally last Wednesday, the 27th of July, the enraged devotees of al-Sadr poured into the streets to slam the designation of al-Sudani by the Shiite Coordination Framework (SCF). After the pro-Sadrist mobs gathered in the iconic Tahrir Square, they crossed the al-Jumhuriya Bridge. Afterwards, the Iraqi Parliament building, located in Baghdad’s strongly fortified “Green Zone,” was subject to a fierce attack. According to eyewitnesses, the Iraqi security personnel made no significant attempts to disperse rowdy protesters who occupied the Parliament while holding Muqtada al-Sadr’s pictures, chanting slogans against al-Sudani, and waving the Iraqi flags. Ultimately, after a considerable period of time, the protesters were scattered with water cannons.

What are Muqtada’s two scenarios for Iraq’s political future?

I) Forcing enemies to conduct a snap election

It seems that al-Sadr is vying to coerce other political currents successfully to succumb to his pernicious ambitions by staging fresh polls and eventually a complete seizure of the state. In the meantime, Mustafa al-Kadhimi, Mohamed al-Halbousi, and Masoud Barzani passionately support al-Sadr’s aggressive tactics to hold an early legislative election. If Iraqis go to the ballot boxes again, it may potentially ensure al-Kadhimi’s presence at the helm of power for at least another momentous year. Since pro-US Iraqi politicians see glimmers of delusional hope that the Middle East political landscape will witness nascent alliances against Iran.

II) Escalation of hostilities and endless political imbroglio
Undoubtedly, al-Sadr will not allow the formation of a government by voluntarily pulling his MPs from participating in the future administration. Consequently, one of the potential outcomes of Muqtad’s chaotic policies and his zealots would be the escalation of social tensions, street fights, or even armed clashes.
In truth, the Sadrists did not expect the SCF to reach a consensus to nominate a moderate and uncontroversial nominee. For this reason, al-Sadr and his adherents are seething with anger and resentment, inciting their supporters to revolt.
The Sadrist movement’s media onslaught continued despite the restoration of peace to Baghdad’s streets, as a spokesperson for Mr al-Sadr unleashed a vitriolic barrage against the Shiite Coordination Framework (SCF), warning that the street protests would escalate into armed battles.
Hence, the renewed call for militant demonstrations and riots in the streets indicates that Muqtada’s followers are trying in every possible way to obstruct the Iraqi Parliament’s meeting next week to elect a PM in order to maintain Iraq in political limbo or even a civil war.
Today, Iraq has reached a watershed moment, with Muqtada at a crossroads

Article
Iraq
isis
There are no comments for this article