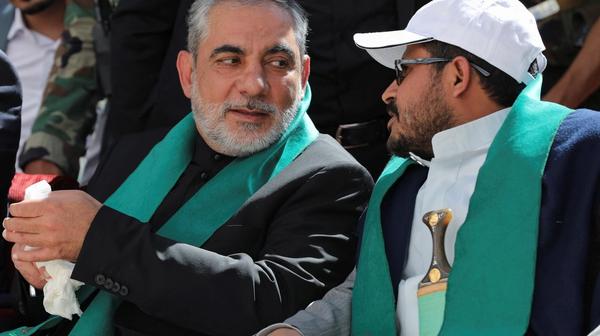 Due to severe COVID-19 disease and his ill-timed evacuation to Iran, the 63-year-old Iranian ambassador to Yemen was martyred on Tuesday, December 21, 2021, a year after his assignment to Sanaa.

One year after the Yemeni National Salvation Government appointed Mohammed al-Dailami as Ambassador Extraordinary and Plenipotentiary of the Republic of Yemen to Iran on August 17, 2019, Iran has appointed the late Hassan Irloo as its new envoy to Yemen.

Following Irloo’s official appointment in Yemen, the fugitive Yemeni government’s information minister fatuously claimed that Irloo’s presence and efforts in Yemen were a threat to regional stability. In response to the appointment of Martyr Hassan Irloo as Iran’s ambassador to Yemen, the then-US State Department spokesman in the Trump administration claimed in a statement that “the Iranian government has sent a member of the Islamic Revolutionary Guards Corps (IRGC) as an envoy to Sanaa, the capital of Yemen.”

In December 2020, the US took action against Irloo, and the US Treasury Department shamelessly declared that sanctions had been imposed on Irloo in connection with fictitious allegations such as extremism. The Iranian Foreign Ministry issued a statement the next day, claiming that US Ambassador Christopher Hansel had a “key role” in the deterioration of Yemen’s humanitarian catastrophe and that his name was on an Iranian sanctions blacklist.

Against all obstacles, Iran’s intrepid diplomat accepted his dangerous mission in the most challenging of conditions. His voyage to Yemen at the time demonstrated his self-sacrifice character. Not every diplomat can have the fortitude to travel to a country besieged on all fronts: sea, land, and air.

During his tenure at the Islamic Republic of Iran’s embassy in Sanaa, Mr. Irloo actively participated in many Yemeni people’s revolutionary struggles, supporting the oppressed Yemeni nation and helping to boost the Yemeni people’s morale and defiance against Saudi barbaric aggression. In addition to his diplomatic responsibilities, he was in charge of the establishment of the Islamic Azad University branch in Sanaa, in which he oversaw everything from the construction of the building to the formation of the board of trustees and even the university’s statutory law.

Hassan Irloo, a valuable member of the Axis of Resistance, went to tremendous lengths to support the Yemeni nation. He was well-known among the leadership of the Yemeni People’s Forces, who appreciated his efforts on behalf.

Because of Iran’s support for Yemen’s resistance, the Saudis have long sought a way to sow discord and tensions between Tehran and Sanaa. They even sought to stir up controversy by claiming that Yemen had expelled the Iranian envoy.

Abdul Malik Al-Ajari, a member of the political bureau of the Yemeni Ansarullah movement, denied any disagreements with Iran. He noted on his Twitter account that the Iranian ambassador left Yemen for medical reasons, albeit belatedly, and that this had nothing to do absolutely with foreign media speculation about an alleged dispute with our Iranian allies.

An agreement was reached between Iran and Saudi Arabia through Iraqi mediation to evacuate Irloo by an Iraqi plane given the poor health condition of the late Iranian ambassador, said Mohammad Abdul Salam, Ansarullah’s spokesperson. What has been falsely said in the media regarding this tragedy is inaccurate.