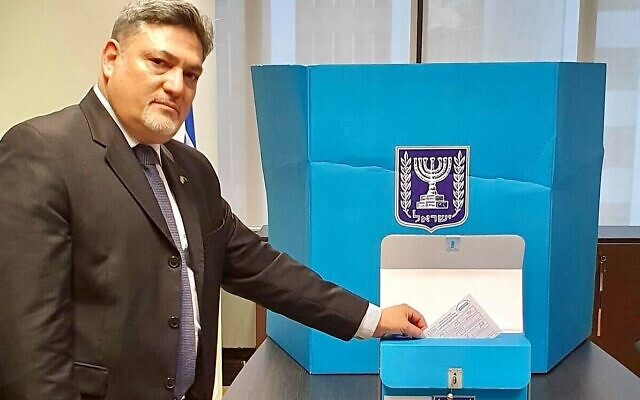 Early voting for Israeli diplomats and staff at the country’s embassies abroad began on Wednesday evening, with the envoy to New Zealand casting the first vote of the March 23 elections

Ambassador Ran Yaakoby voted at a booth set up for diplomatic staff at the embassy in Wellington, which opened at 10 p.m. Israel time.

The ballot boxes at the embassies will remain open for two days, the Central Elections Committee announced on Tuesday.

Votes in an Israeli election will be cast for the first time at four new diplomatic outposts: Morocco, Bahrain, and Abu Dhabi and Dubai in the United Arab Emirates.

Israel established diplomatic relations with the UAE, Morocco and Bahrain, as well as with Sudan and Bhutan, since the last national election in March 2020.

According to Israeli law, private citizens living abroad cannot vote unless they come to Israel, but exceptions are made for diplomats and their families. Some 4,000 Israelis will be allowed to vote at the diplomatic offices worldwide.

The law against absentee voting caused controversy in recent weeks after Israel halted flights and barred international travelers due to the pandemic, stranding thousands of citizens abroad ahead of the election. The airport has since been opened.

The upcoming election is Israel’s second to take place under the shadow of the pandemic. The previous election, in March 2020, was held shortly after the coronavirus first reached the country, with several special polling stations serving the relatively few people who had then been suspected or confirmed to have contracted the virus or come in contact with confirmed carriers.

Israel will fund special shuttles to polling stations for active COVID-19 patients during the upcoming vote, a top official said Monday, alongside further adaptations forced by the pandemic that will turn the election into the most expensive in the country’s history.

Central Elections Committee director Orly Adas also told reporters that dozens of buses will be converted into ballot stations for people in quarantine and to lower crowding in certain polling stations.

The committee is weighing placing voting stations at Ben Gurion Airport so that arrivals to the country will be able to vote there before they enter home quarantine.

There are currently close to 37,000 active COVID-19 cases in the country, and tens of thousands of people are in quarantine.