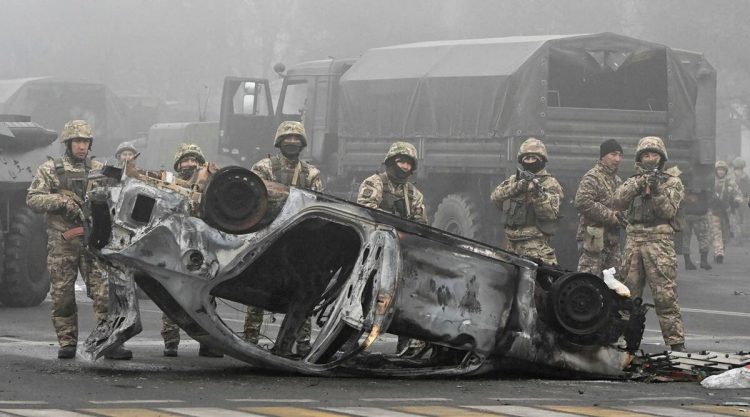 Why won’t Russian President Vladimir Putin allow another Color Revolution in Kazakhstan aimed at overthrowing its allies and repeating the Ukraine lesson? Why did the Chinese leader endorse Putin immediately and declare his full support for the Kazakh government?

How did Tony Blair’s sinister role in Kazakhstan become a symbol of corruption and the foundation for today’s protests? What happens once the demonstrations are over?

Angry public demonstrations in most Kazakh towns, which were confronted with live ammunition from state security forces, represent one of the escalating tensions between the Russia-China axis and the US-led bloc in both Europe (Ukraine) and Central Asia (Kazakhstan). Kazakhstan is afflicted by two major crises: first, the strategic geographic position of its two great neighbors, China and Russia; and second, corruption and an authoritarian political structure. Kazakhstan’s protests are mostly peaceful, and they are in response to the country’s increasing poverty rates, which have coincided with rising unemployment and government corruption in one of Central Asia’s richest countries. These dramatic circumstances, alone or in combination, provide great entrance points for Western, mainly American, and British conspiracies to infiltrate and destabilise countries like Kazakhstan. It is clear that the US is attempting to foment a Colour Revolution in order to shift Russia’s attention away from Ukraine and toward Kazakhstan. Washington would have succeeded if the Russians had not reacted immediately by deploying nearly 2.500 troops to the crisis-stricken Kazakhstan.

Kazakhstan’s decision to request Russian military assistance to cope with a continuing wave of unrest has been questioned by US Secretary of State Antony Blinken. However, Russian authorities have stressed that the deployment of their troops under the Collective Security Treaty Organization (CSTO), a Eurasian military alliance made up of five former Soviet republics plus Russia, is not permanent. Kazakh President Kassym-Jomart Tokayev issued the appeal for Russian aid after demonstrators seized the mayor’s office in Almaty, Kazakhstan’s biggest city, and overran the airport. Late last week, the Russian-led coalition sent soldiers to Kazakhstan, where Tokayev’s authoritarian government lost control of the country’s largest city, Almaty, due to violent demonstrations. Russia dispatched the biggest deployment, with paratroopers and armoured vehicles backed up by several hundred troops from the alliance’s other former Soviet republics: Belarus, Armenia, Kyrgyzstan, and Tajikistan. Tokayev said that the force consists of around 2,300 men.

Many people were surprised when the protests in Kazakhstan started last Wednesday. Although the protests were sparked by dissatisfaction with the increase in fuel prices, some have asserted from the start that the unrests are the result of internal strife in Kazakhstan and that the protests were exploited, if not planned, by incumbent President Tokayev to weaken the former President Nursultan Nazarbayev’s pressure and influence. The suspicions grew, especially when reports surfaced that Nazarbayev had abandoned the country. The rumor was debunked on Saturday by Nazarbayev’s spokesperson, who said that the father of modern Kazakhstan was in the city. His Twitter post said that the former president is in the country, that he has met with Tokayev numerous times, and that he is in communication with him. He also “spoke to leaders of friendly countries and pushed on the people to unite behind support for the incumbent president to weather the current challenges,” according to the source.Although claims of Nazarbayev’s resignation have been denied, there is no doubt that Tokayev has taken advantage of the recent protests to undermine Nazarbayev’s authority. Despite the fact that Nazarbayev has not been president since 2019, he has maintained his influence and authority in the former Soviet republic. Tokayev seems to be attempting to isolate Nazarbayev from power, which is why he was removed from the influential National Security Council chair during the demonstrations.

The continuing protests in Kazakhstan, on the other hand, demonstrate that the issue extends far beyond an internal power struggle, even though it gave an excellent chance to settle political scores. Karim Masimov, who was also dismissed from his job as the committee’s head during the protests, was detained on Saturday by the National Security Committee. Masimov, a strong admirer of Nazarbayev, was Prime Minister from 2007 to 2012 and again from 2014 to 2016. His incarceration and dismissal are seen as part of the current president’s purging strategy.

Russia is deeply worried that Kazakhstan’s instability and insecurity will extend to Russia, and would not allow unrest in Kazakhstan under any circumstances.

Some pundits believe Kazakhstan’s protests are reminiscent of a colour revolution, a string of Western-backed political changes in Russia’s neighbours during the 2000s.

Regional leaders, including Armenia, Turkey, Tajikistan, and Azerbaijan, responded by rallying with the Kremlin’s pledge of support for Kazakhstan’s president, emphasizing that they stand with Moscow under these circumstances.

With regional states aligning their stances with Russia in favour of Kazakhstan’s leadership, a colour revolution in the huge and important Central Asian country does not appear to have a chance of succeeding.