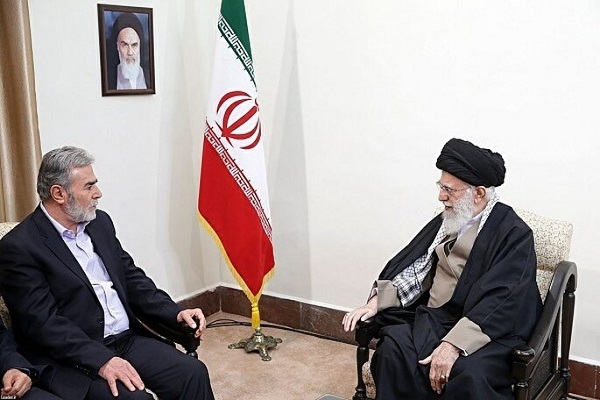 In a Thursday letter addressed to Secretary General of the Gaza-based Islamic Jihad movement Ziad al-Nakhala,  Ayatollah Seyed Ali Khamenei hailed the steadfastness and resilience of the Islamic Jihad during the recent three-day-long Israeli military onslaught on the besieged Gaza Strip, stating that the group proved that any segment of the resistance front can rub the Tel Aviv regime’s nose to the ground.
Ayatollah Khamenei said the heroic and courageous perseverance of the group elevated its status among other Palestinian resistance factions, thwarted the plots of the usurping Tel Aviv regime and took the Zionists down a peg.
The Leader also underlined the need for maintaining unity among all Palestinian groups.
“The usurping enemy is getting weaker, at the same time that the Palestinian resistance front is getting stronger,” Ayatollah Khamenei pointed out.
Earlier this week, Nakhalah had written to Ayatollah Khamenei about the presence of Palestinian fighters throughout the Gaza Strip and the occupied West Bank in a united front against the Israeli aggression.
In his letter, the Islamic Jihad chief had stated that Palestinians living in the Gaza Strip vigorously withstood the latest Israeli aggression on the besieged enclave.
“We dubbed the recent bout of violence ‘Wahda al-Sahat’ (Unity of the Fields) to emphasize the unity of our nation against the enemy, which is trying to wreck it through all available means and conspiracies,” Nakhalah wrote.
“I received your solemn and auspicious letter. May God give you noble reward and bring the final victory of the proud and oppressed Palestinian nation near,” Ayatollah Khamenei responded.
“The recent incident doubled the honors of the Palestinian Islamic Jihad movement and elevated the position of the Islamic Jihad in the glorious resistance movement of the Palestinian nation.
“With your brave resistance, you neutralized the deceitful policy of the usurping regime. You proved that each part of the resistance bloc alone can rub the enemy’s nose to the ground,” the Leader said.
Ayatollah Khamenei also praised Islamic Jihad for uniting anti-Israeli resistance in the occupied West Bank and the besieged Gaza Strip.
“By linking the struggle in Gaza with the West Bank and other resistance forces with their support for the jihad movement, you were able to display the integrity of the Palestinian nation’s jihad against the evil and deceitful enemy.
Ayatollah Khamenei said all the efforts of the Palestinian groups throughout Palestine should go towards maintaining this unity.
“The usurper enemy is getting weaker and the Palestinian resistance is getting stronger, and there is no power but from God,” the Leader said, reiterating that “by God’s will, we are still with you” and Iran’s vows in support of the resistance is intact.