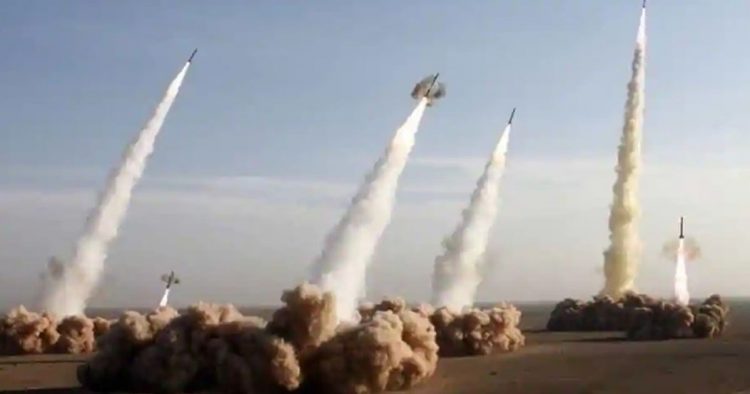 Based on international laws and the inalienable right of self-defense, at 1:20 a.m. Wednesday, January 8, 2020, Iran’s Islamic Revolutionary Guard Corps (IRGC) fired hundreds of ballistic missiles at the American Ain al-Assad airfield in response to the US terrorist and criminal act of assassinating General Qassem Soleimani and his associates. Since the Japanese invasion of the Pacific port of Pearl Harbor, the IRGC’s missile strike on the Ain al-Assad airfield, which is the most well-equipped and important American facility in Iraq, could be regarded as the biggest strike against the American army in history. The Qiam (Uprising) and Fateh-313 (Conqueror) missiles were fired against the bases of the US terrorist army. The IRGC’s attack relied heavily on the missiles’ superior stealth and radar evasion capabilities, which made them very challenging for the enemy’s defence systems to intercept and destroy. Additionally, the Qiam missiles are one of the few capable of carrying multiple warheads and have the destructive power of numerous missiles. When reports of Iran’s missile strike on the Ain al-Assad plant broke, the US used all of its media might to keep the full extent of the Iranian attack hidden from the public, fearing political repercussions and a media frenzy. The Pentagon initially reported that no American military personnel had been killed in the strike and that the installation had suffered very minor damage. Although the commander of Ain al-Assad stated that no one was killed, a BBC journalist who visited Ain al-Assad a week after the bombing said the airfield was severely damaged. More than a month after the IRGC’s missile strike, the Pentagon said on February 11, 2020, that 109 troops had suffered severe brain concussions due to Iran’s missile assault on two American airbases. The number of injured American soldiers has increased over time. The memoirs of those American troops who were at Ain al-Assad revealed dark details more than a year after the incident. On the night of the strike, Alan Johnson, a commander at the Ain al-Assad facility, said, “Words cannot describe the fury of those missiles. One of them swept by me like a blast of wind, scattering dust with a strong odour of ammonia. “The blast wave exploded in flames. One witness said that the flames were 70 feet high, and our bunkers had no shelter from the fire wave. Another US military official, Frank Mackenzie, said: “I have never been in a circumstance when real missiles were fired on our troops and installations.” That’s when I realised the seriousness of the situation. With these missiles, the Iranians had a vast range and could target almost anywhere they wanted. “Did the base have any means of defence against ballistic missiles?” questioned Tim Garland, who was heading a military unit at Ain al-Assad. “No,” he said emphatically. This was a distinct danger. As a result, I doubt that such a prediction was ever made, as a result of which no countermeasures against a ballistic missile assault were in place. ….Only the building’s structure was spared from the IRGC’s rocket barrage. Iranian missiles drilled holes the size of a room deep into the earth, and concrete barriers around the facility were blasted by explosions. To be honest, I didn’t believe we’d make it through the attacks, “Stacey Coleman, a member of the US Air Force stationed in Ain al-Assad, said. “Our bunkers, which were erected during Saddam Hussein’s reign, offered adequate shelter, but they were insufficient.” “It was like something out of a movie,” John Heinz remarked, “where everything is destroyed but no one is wounded.” When all of these issues are considered, the Americans’ precarious situation becomes evident. According to a spokeswoman for the US Department of Defense under the Trump administration, the White House has pressured the Pentagon not to provide figures and reports on the damage caused by an Iranian missile assault on a US  military base in Iraq more than two years ago. Furthermore, the brain concussions of US troops were minimised. The Americans, on the other hand, were unable to respond to the Iranian missile attack because they did not want to risk further Iranian retaliation. They witnessed Iran’s might and competence from throughout the Middle East. Regardless of the massive financial and human costs to the United States, the Islamic Republic’s actions were smart. With this tactic, Iran effectively destroyed the Americans’ ability to respond to attacks as well as their sense of invincibility.