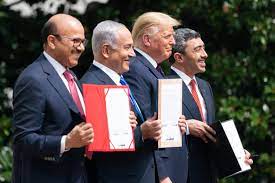 The Zionist government has always sought to sow seeds of division between Arabs and Muslims by claiming to seek a settlement with the Palestinians. For decades, the Zionists engaged in a never-ending series of phony peace proposals to buy more time, but in reality, Tel Aviv attempts to stifle the Palestinian uprising. Unfortunately, Israel’s fake peace-loving gestures and deceptive maneuvers have fooled some Palestinian officials and Arab leaders, making them enmeshed in an unending cycle of bargaining and futile negotiations. It is an indisputable fact that the Zionist regime’s primary goal over the last half-century has been to reinforce their illegitimate occupation of Palestine. It should be a source of real shame for the UAE and Bahraini regime to normalize their diplomatic ties with Israelis who perpetrate every day horrible crimes against the Palestinian nation. Even though clandestine ties between Emirati leaders and Israel have always existed, the so-called Abraham Peace Treaty is the third formal peace treaty signed between Arabs and Israel, following the 1979 Camp David Accord and the 1994 Jordan-Israel peace treaty. The irony is that the Emirati sheiks reached a peace agreement with the Zionist government under the guise of supporting the Palestinian cause. Behind the scenes, however, the Emirati tyrant and the Zionist government hatched a plot to annex the West Bank to Israel in return for Washington’s permission to sell F-35 fighter jets to Abu Dhabi. By cultivating overt relations with the Zionist regime, the Emirati rulers have clearly shown that the “Palestinian cause” has not been one of their policy priorities. Exhorted by Saudi Arabia or ‘Big Brother,’ the Bahraini regime, which subjugates the Bahrainis, followed the UAE’s lead and agreed to join the shameful treaty with Zionists. Despite the UAE government’s claims, normalizing ties with Tel Aviv was a stark violation of the oppressed Palestinian people’s aspirations. “This [deal] rewards Israel for continuing to occupy us, killing [our] children,” said Saeb Erekat, the late senior leader of the Palestine Liberation Organization, describing the UAE deal with Israel as a ‘stab in the back.’ The Zionist regime has never respected its international obligations. In either case, the peace agreement with the UAE and Bahrain benefits Tel Aviv even more than its Arab allies. Now that Netanyahu has crossed the bridge voiced his opposition to the US sale of F-35 fighter jets Abu Dhabi, stressing that only Israel should have these strategic warplanes in the Middle East. It will eventually become clear that the Emirati regime will lose out in the agreement with Israel and that the treacherous Arab rulers will face dangerous ramifications and earn animosity from their nations.