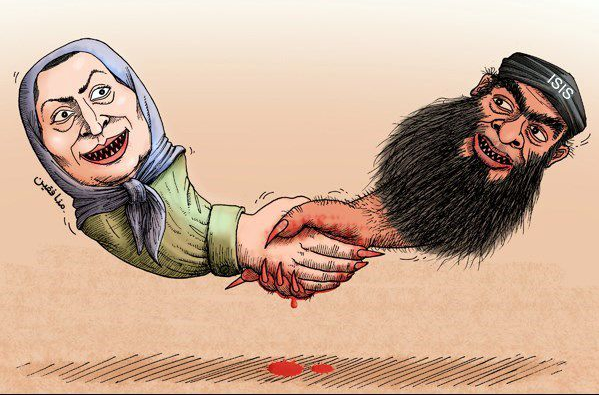 The vicious plot to “destroy Iran” is the top priority of the Islamic Republic’s enemies because, in the years following the 1979 revolution, they began a relentless attempt under any pretext to exact revenge for their failures to save their puppet, the infamous Shah, and successive defeats they suffered at the hands of the Iranian nation. In recent weeks, we have witnessed riots and disturbances in several districts of Iran, mostly in Kurdish-populated areas.

The disturbance began under the guise of Mrs. Mahsa Amini’s natural death, and enemies sought to make the most of this sorrowful tragedy for their nefarious political gains. Perhaps there was some genuine criticism in the early days of the demonstrations. However, as time passed and Iran’s avowed foes got engaged in the riots, the peaceful nature of the protests gave way to one of violence and carnage across Iran.

According to observers, the anti-Iran terrorist group People’s Mojahedin Organization [PMOI] left a bloody footprint during the current unrest, and many riot-related findings ultimately point to PMOI terrorists or Saudi-funded Persian-language media. The London-based BBC and Iran International news networks have been covering the subversive activities of PMOI agent provocateurs in the past few weeks’ riots.

The Saudi-supported news channels’ propaganda machine is still spewing their accounts of events, which are all blatant lies, while PMOI militants headquartered in Albania are incessantly using robots to boost anti-Iran hashtags in social media.

It is now a fact that the street riots are orchestrated by PMOI terrorists, who employ deceived youngsters and hooligans as their saboteurs. Since the onset of the unrest in Iran, the Iranian security and intelligence agencies have apprehended several PMOI terrorists, proving the group’s unequivocal involvement in the ongoing violence.

According to PMOI spokespersons on Saudi government networks like Al-Arabiya, Al-Hadath, and SA 24, “basically, our forces [the PMOI] have been trained and formed for these days; for instance, one of their assignments is to vandalise and burn the pictures of Qasem Soleimani.”

ISIS has practically lost all of its strongholds due to the Iranian military’s and its allies’ victories against the ISIS terrorists in different parts of Iraq and Syria. ISIS now hopes that by carrying out terrorist strikes inside Iran, it will lure a small number of adherents in border areas, permitting them to seize villages and turn them into their headquarters. To this end, ISIS terrorists took advantage of the insecurity in Iran to invade the holy Islamic shrine in Shiraz, Shah-Cheragh, where 15 pilgrims, including women and children, were callously massacred.

biden
isis
Iran
There are no comments for this article