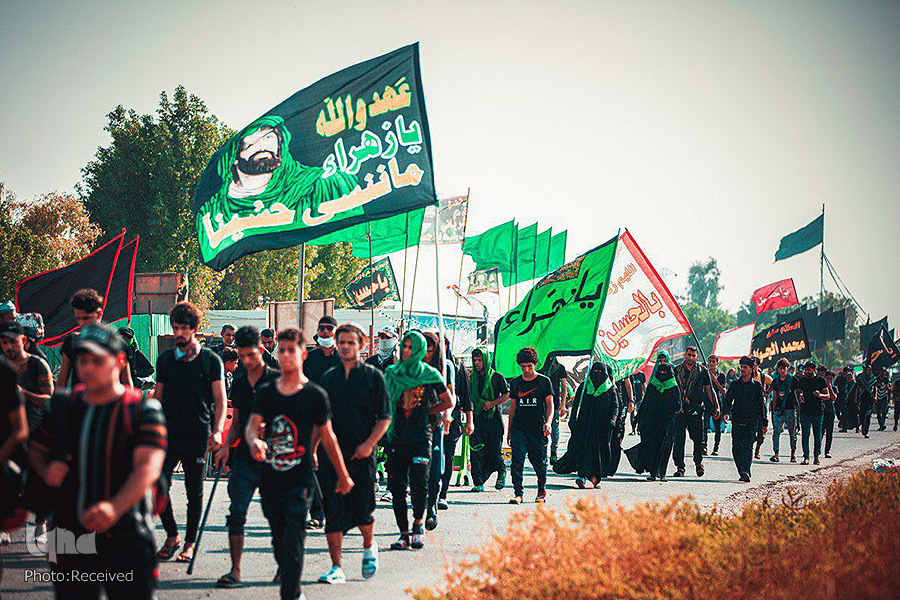 What are the Arba’een Pilgrimage and its background?
The Arba’een pilgrimage or the Arba’een Walk or Karbala Walk is the world’s largest annual public gathering. It is held at Karbala, Iraq at the end of the 40-day mourning period following Ashura, the religious ritual for the commemoration of the martyrdom of the grandson of the Islamic prophet Muhammad and the third Shia Muslim Imam, Husayn ibn Ali in 61 AH (680 AD). He is believed to transcend all cultural boundaries and be a symbol of universal freedom, compassion and social justice. Anticipating Arbaʽeen, or the fortieth day of the martyrdom, the pilgrims make their journey to Karbala on foot, where Husayn and his companions were betrayed by the very people who invited him to Kufa, Iraq, and then subsequently martyred and beheaded by the army of Ubayd Allah ibn Ziyad in the Battle of Karbala. The number of participants in the annual pilgrimage reached 25 million or more by 2016. On the routes of the pilgrimage, food, accommodation and other services are provided for free by volunteers. Some of the pilgrims make their journey from cities as far as Basra, about 500 kilometres (310 mi) away by road.
The ritual has been described as “an overwhelmingly powerful display of Shia belief and solidarity”.Iran and Shias however have criticized mainstream media for ignoring the event. Jabir ibn Abd Allah alongside Atiyah ibn Sa’d were the first pilgrims of Husayn ibn Ali in the Arba’een of 61 AH (AD 680). According to narrations, the custom of performing the pilgrimage on foot was forgotten during the period after Morteza Ansari and it was revived by Mirza Husain Noori Tabarsi in an Eid al-Adha who repeated this action every year performing the last one by 1319 AH (AD 1901). Some other scholars and Marjas kept on the same manner in Arba’een up to Saddam’s time during which the pilgrimage was banned although a small number of people used to perform it secretly. It was revived just after Saddam’s overthrow in 2003 and the number of participants grew year after year reaching 20 million pilgrims by 2016. Shia cities, towns and villages all over Iraq are empty ” during the 20 days of the pilgrimage “as their people take to the roads in an elaborately organised and well-protected mass movement not seen anywhere else in the world”.By 2014, over 19 million people from 40 countries of the world participated in this occasion, making it the second largest gathering in the world. The figure reached 22 million pilgrims by 2015, according to Iraqi state-run media. By 2016, according to al-Khoei Foundation, almost 22 million pilgrims gathered in Iraq, 10% more than in 2014. Even though the Hindu Kumbh Mela is larger in population, it is only held every four years, and hence the Arba’een pilgrimage is the largest gathering held annually. The pilgrimage is marked by long walks from Najaf or Basra to Karbala. People from different walks of life, ethnicity and sect participate in the march including toddlers in prams and the elderly pushed in armchairs.


Who can join this walk of love and how do pilgrims get served?
Millions of people from around the globe gather in Iraq’s holiest city of Karbala to commemorate Arbaeen and to pay tribute to the martyrs of the Karbala-Arbaeen pilgrimage or Arbaeen walk is widely recognised as the single largest annual peaceful gathering in the world where people swarm together and walk towards the shrines of Imam Husain (a) and  Abbas (a) to pay tribute to their greatest sacrifice. The son of  Fatima (a)  and Imam Ali (a) left an everlasting legacy 1378 years ago which is still inspiring mankind and will keep on inspiring till the existence of this world. There are Men, Women & Children of all ages, babies in arms ( note it is extremely difficult to even walk a short distance with a baby in arms ), Aged people with bent backs & walking sticks & all health conditions incl wheelchairs, amputated /prosthesis legs & crutches. Some are Barefooted, Most of them are Iraqis & many as far as Basra entailing a 16-day walk. So anyone can go on this walk without any fear or inhibition. This reflects partially the Epic Kerbala battle where Imam Hussain(as) had with himself Men Women & children of all age groups from different sections of society. Walking on crutches /Barefoot & The artificial leg & Crutches also resting at a camp. You can easily experience the sadness on the faces of those inviters who fail to convince zawwars to visit their mawkish (temp resting places) and stalls. Eat Daal Chawal, Stew with hot tandoori rotis, falafel sandwiches, hot khubs with cheese, fried chicken with French fries and that is all about what we could eat otherwise there were a whole lot of other things on offer. Dates, like tea, were available literally at every 50 steps and normally kept in the middle of the road so as not to interrupt the cruising speed of the pilgrims and provide an opportunity for a quick pick something like the marathon runners who pick up water without pausing. Small Children are involved in this service as much as the elders. It appears that all normal activity is shut down these days & families simply devote themselves to this service.
An alim pouring tea for the pilgrims, a man replacing a table with himself and sitting in the middle of the road holding a thali ( large flat vessel) on his head with food on it, an army soldier massaging the legs of pilgrims, another one distributing plastic spoons to facilitate eating, one man simply waving to the pilgrims with a pleasant smile and calling out the Islamic greetings of salaam, yet another training his 3-4year old son the importance of the pilgrims and their status by making the kid distribute tissue paper to the walkers are some of the other scenes that get embossed forever and yet there are so many other observations one can enumerate but there comes a moment where the war feels that justice is not possible anymore in describing the events. Tons of Food get cooked & consumed at millions of dollars/dinars.
The hospitality of the people of Iraq for the pilgrims on Arba’een.
Iraq has been a war-torn country for almost 50 years, but despite this, the way the people of Iraq, from Najaf to Karbala and throughout this walk, open their hearts and homes and serve you with all they have with humility and compassion, is unbelievable. This classless and non-discriminatory walk is a perfect model of how an equal and healthy society should be, which is mesmerising, to say the least. The display of brotherhood one gets to experience during this walk is a miracle in this age and era, where the capitalist system has almost destroyed the humanity in humans. Provision of services and hospitality during the Arba’in visitation is a social practice performed across the central and southern regions of Iraq, from where processions of visitors and pilgrims converge towards the Holy City of Karbala. The tradition – a social practice with deep roots in the Iraqi and Arab tradition of hospitality – is an immense display of charity through volunteering and social mobilization and is considered to be a defining element of Iraq’s cultural identity. Every year, around the 20th of the Islamic month of Safar, the Iraqi province of Karbala receives millions of visitors in one of the world’s most populous religious pilgrimages. Hailing from different regions in Iraq and abroad, visitors walk to the Holy Shrine of Imam Hussein. A vast number of people contribute their time and resources to providing the pilgrims with free services along the route. Starting at least two weeks before the date of Arba’een, associations set up temporary facilities or reopen more permanent ones along the pilgrimage routes, including prayer halls, guest houses and stands offering various services. Many people also open their houses for free overnight accommodation. Bearers and practitioners include cooks, families offering hospitality, the administration of the two Holy Shrines in Karbala, volunteer guides, volunteer medical teams, and benefactors contributing generous donations.


Conclusion.
Arbaeen is no doubt a commemoration of Imam Hussain (a)’s revolution. A revolution which was aimed at fighting against social injustice, oppression, and people’s unawareness. The tyrants at the time of Imam Hussain (AS) did everything to abolish the limits that distinguish right from wrong and aimed at redefining the religious and social values according to their own will for the society of that time. But Imam Hussain (AS) stood against them and did not allow them to be successful in their evil plans by sacrificing himself and his family to revive Islam. He firmly believed that living under tyranny was the same as living in hell: “To me, death is nothing but happiness and living under tyrants nothing but living in hell.”