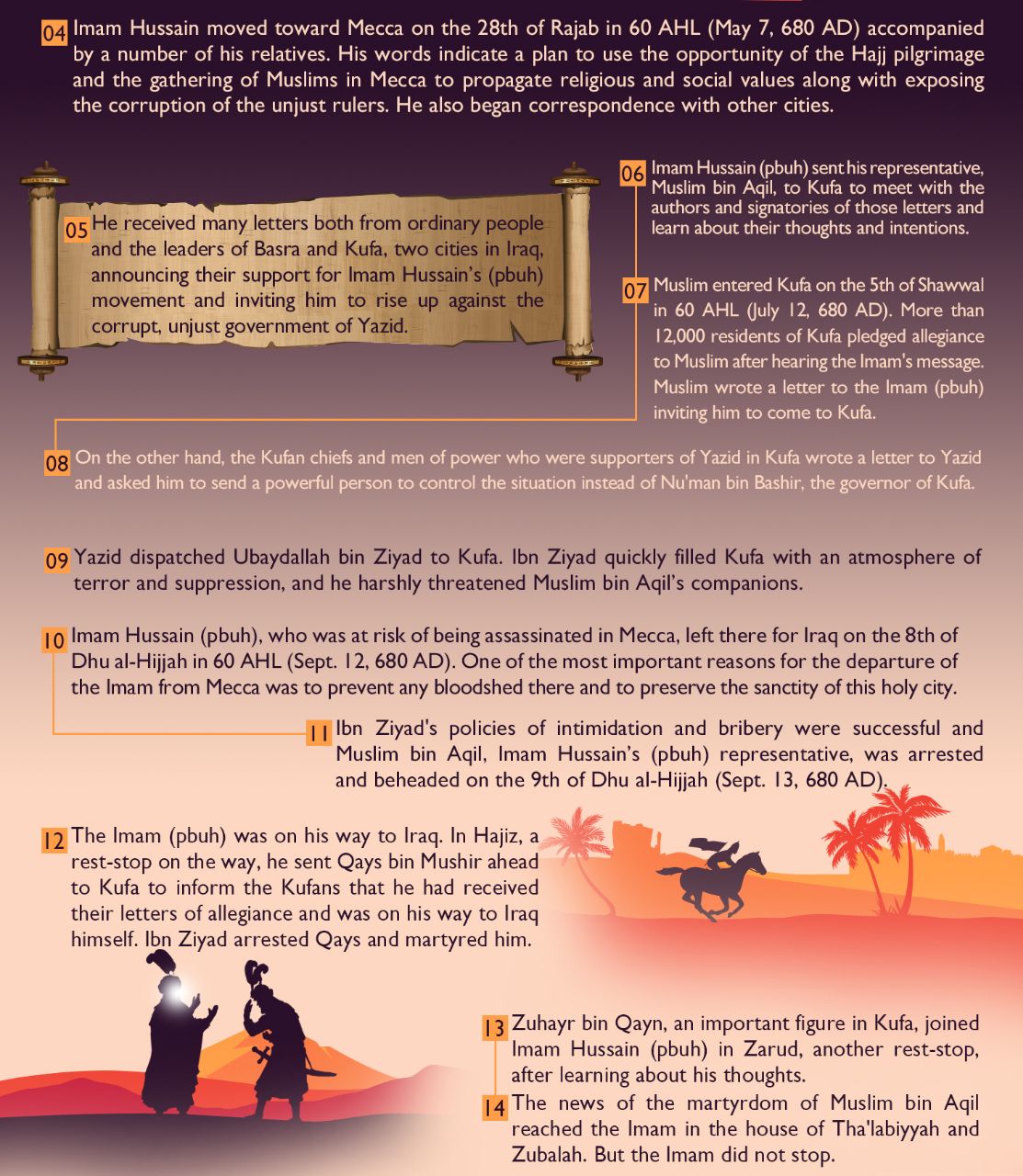 Imam Hussain moved toward Mecca on the 28th of Rajab in 60 AHL (May 7, 680 AD) accompanied by a number of his relatives. His words indicate a plan to use the opportunity of the Hajj pilgrimage and the gathering of Muslims in Mecca to propagate religious and social values along with exposing the corruption of the unjust rulers. He also began correspondence with other cities.
Imam Hussain pbuh sent his representative.
Muslim bin Aqil, to Kufa to meet with the authors and signatories of those letters and learn about their thoughts and intentions.
He received many letters both from ordinary people and the leaders of Basra and Kufa, two cities in Iraq, announcing their support for Imam Hussain's (pbuh) movement and inviting him to rise up against the corrupt, unjust government of Yazid.
Muslim entered Kufa on the 5th of Shawwal in 60 AHL (July 12, 680 AD). More than 12,000 residents of Kufa pledged allegiance to Muslim after hearing the Imam's message. Muslim wrote a letter to the Imam (pbuh) inviting him to come to Kufa.
On the other hand, the Kufan chiefs and men of power who were supporters of Yazid in Kufa wrote a letter to Yazid and asked him to send a powerful person to control the situation instead of Nu'man bin Bashir, the governor of Kufa.
Yazid dispatched Ubaydallah bin Ziyad to Kufa. Ibn Ziyad quickly filled Kufa with an atmosphere of terror and suppression, and he harshly threatened Muslim bin Aqil's companions.
Imam Hussain (pbuh), who was at risk of being assassinated in Mecca, left there for Iraq on the 8th of Dhu al-Hijjah in 60 AHL (Sept. 12, 680 AD). One of the most important reasons for the departure of the Imam from Mecca was to prevent any bloodshed there and to preserve the sanctity of this holy city.
Ibn Ziyad's policies of intimidation and bribery were successful and
Muslim bin Aqil, Imam Hussain's (pbuh) representative, was arrest and beheaded on the 9th of Dhu al-Hijjah (Sept. 13, 680 AD).
The Imam (pbuh) was on his way to Iraq. In Hajiz, a rest-stop on the way, he sent Qays bin Mushir ahead to Kufa to inform the Kufans that he had received their letters of allegiance and was on his way to Iraq himself. Ibn Ziyad arrested Qays and martyred him.
Zuhayr bin Qayn, an important figure in Kufa, joined Imam Hussain (pbuh) in Zarud, another rest-stop, after learning about his thoughts. The news of the martyrdom of Muslim bin Agil reached the Imam in the house of Tha'labiyyah and Zubalah.
But the Imam did not stop.