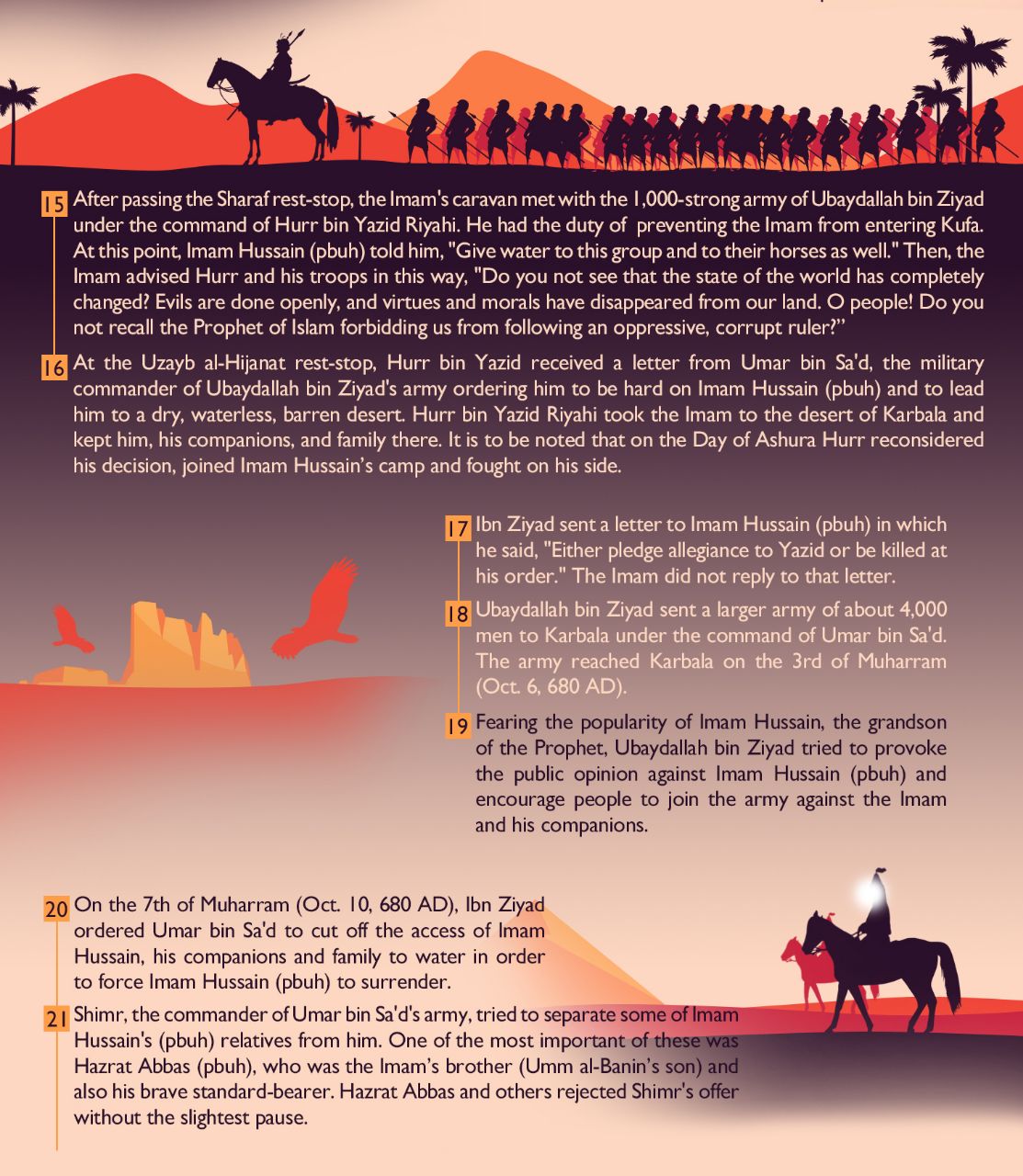 After passing the Sharaf rest-stop, the Imam's caravan met with the 1,000-strong army of Ubaydallah bin Ziyad under the command of Hurr bin Yazid Riyahi. He had the duty of preventing the Imam from entering Kufa. At this point, Imam Hussain (pbuh) told him, "Give water to this group and to their horses as well." Then, the Imam advised Hurr and his troops in this way, "Do you not see that the state of the world has completely changed? Evils are done openly, and virtues and morals have disappeared from our land. O people!
Do you not recall the Prophet of Islam forbidding us from following an oppressive, corrupt ruler?"
At the Uzayb al-Hijanat rest-stop, Hurr bin Yazid received a letter from Umar bin Sa'd, the military commander of Ubaydallah bin Ziyad's army ordering him to be hard on Imam Hussain (pbuh) and to lead him to a dry, waterless, barren desert. Hurr bin Yazid Riyahi took the Imam to the desert of Karbala and kept him, his companions, and family there. It is to be noted that on the Day of Ashura Hurr reconsidered his decision, joined Imam Hussain's camp and fought on his side.
Ibn Ziyad sent a letter to Imam Hussain (pbuh) in which he said, "Either pledge allegiance to Yazid or be killed at his order."
The Imam did not reply to that letter.
Ubaydallah bin Ziyad sent a larger army of about 4,000, men to Karbala under the command of Umar bin Sa'd.
The army reached Karbala on the 3rd of Muharram (Oct. 6, 680 AD). Fearing the popularity of Imam Hussain, the grandson of the Prophet, Ubaydallah bin Ziyad tried to provoke the public opinion against Imam Hussain (pbuh) and encourage people to join the army against the Imam and his companions.
On the 7th of Muharram (Oct. 10, 680 AD), Ibn Ziyad ordered Umar bin Sa'd to cut off the access of Imam Hussain, his companions and family to water in order to force Imam Hussain (pbuh) to surrender.
Shimr, the commander of Umar bin Sa'd's army, tried to separate some of Imam Hussain's (pbuh) relatives from him. One of the most important of these was Hazrat Abbas (pbuh), who was the Imam's brother (Umm al-Banin's son) and also his brave standard-bearer. Hazrat Abbas and others rejected Shimr's offer without the slightest pause.

Muharram2022
Karbala
yazid
There are no comments for this article